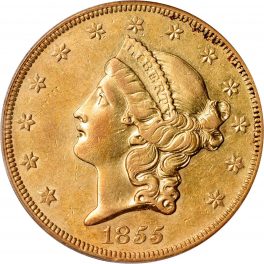 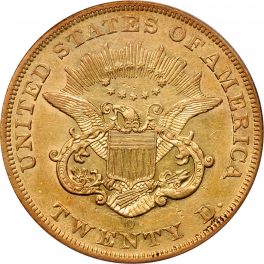 The 1855-O $20 double eagle does not match 1854-O and 1856-O in rarity, but it is certainly among the most elusive Type I issues. The obverse is a bit softer struck on average, and the reverse typically comes sharp but with a weak mintmark, which is not altogether uncommon for New Orleans mint coins. Scarce in all grades, the majority of survivors exhibit Very Fine preservation, becoming progressively scarcer up through About Uncirculated where only about a dozen pieces are thought to exist. Just two coins are currently known in Mint State; an MS-60 (NGC) and an MS-61 (NGC).