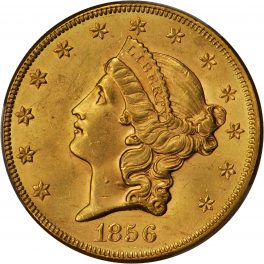 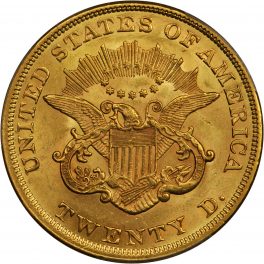 The 1856 $20 double eagle is a surprisingly elusive date for a Philadelphia mint coin, considering its mintage of 329,878 coins. Examples are well-struck overall with natural coloration ranging from green-gold to lighter orange-gold. Unfortunately, conservation has subdued the luster and stripped the originality of many pieces in recent years, and original examples are becoming increasingly difficult to encounter. Examples grading Very Fine to Extremely Fine can be located with persistence, though AU pieces are considerably scarce with only about a hundred pieces known. Only a few examples were recovered from the shipwrecks of the SS Central America and the SS Republic and as such, this issue remains rare in Mint State. An estimated two dozen Uncirculated examples are known, the finest of which grade MS-63.