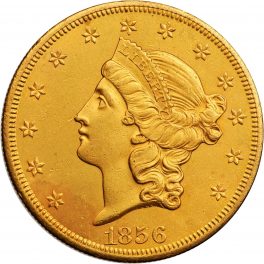 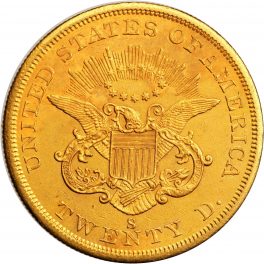 The 1856-S $20 double eagle is well-produced overall and is one of the most available Type I issues from San Francisco or any other mint. Several hundred coins were recovered from the S.S. Central America shipwreck, and another hoard, lost in 1857, was literally unearthed in the 1970s from a limestone strata under what used to be a river inlet near Fort Capron, the last coins having etched surfaces. Examples are readily available in all circulated grades, the majority of which are in Choice EF to AU condition. 59 Mint State coins were recovered from the SS Republic and hundreds were pulled from the wreckage of the SS Central America, contributing to the estimated 500 Uncirculated pieces in total available for collectors.