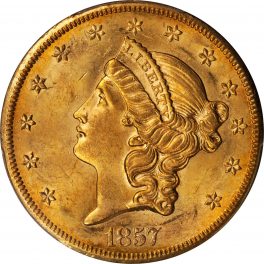 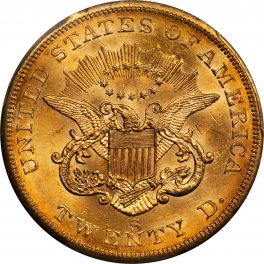 The 1857-S $20 double eagle will bring beauty and, if you are lucky to come across one from a treasure hoard, a gripping history to your cabinet. A large trove of 1857-S double eagles was recovered from the wreck of the S.S. Central America, lost at sea in a hurricane on September 12, 1857. Discovered by a crew from the Columbus-America Discovery Group in 1987, more than 400 gold bars were recovered from the wreckage in addition to double eagles from several years. Up until this treasure find, the 1857-S (from the San Francisco mint) was elusive in Mint State but considered plentiful in lower grades. Overall, this coin is very well struck with superb detail of Miss Liberty’s hair, stars and other features. The use of multiple die pairs and striking periods yield some variations in strike quality. Examples of this issue are now widely available in all conditions, with a vast majority of the population surviving in Mint State. Well over 5,000 Uncirculated pieces were recovered from the wreck of the SS Central America, the majority of these in grades ranging from MS-63 to MS-65, with the finest examples grading MS-67.