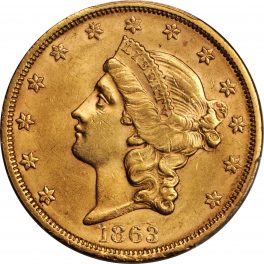 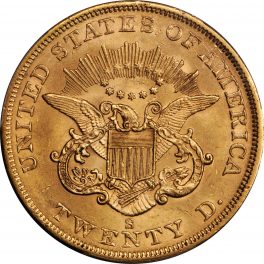 The 1863-S $20 double eagle is usually softly struck across the most intricate regions of the obverse. Most higher-grade pieces known today were brought to the market after they were recovered in the 1990s from the 1865 shipwreck of the S.S. Brother Jonathan. These shipwreck pieces tend to have nice and frosty luster, while non-shipwreck coins of this San Francisco mint issue often exhibit more grainy luster. Just about 300 1863-S $20s were recovered from the wrecks of the SS Republic and the SS Brother Jonathan combined, making this issue readily available in all circulated grades up through Choice AU– which tend to appear at auction roughly a dozen times per year. Mint State coins are scarce, with over 100 examples though to exist in the market, the finest of which are MS-64.