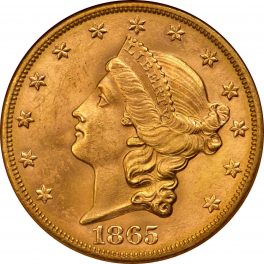 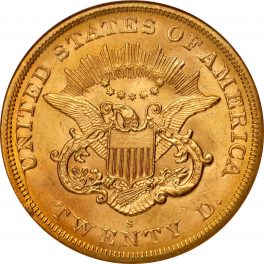 Striking quality varies widely for the 1865-S double eagle, although most examples are softly struck on the obverse over the hair curls along Libertys brow and the high points of the coronet. Shipwreck-recovered examples, however, tend to be sharper on the obverse, while the reverse of both shipwreck and non-shipwreck coins is typically well struck. High grade 1865-S double eagles have good luster, typically frosty or satiny in texture, although a few of the shipwreck examples are subdued from years of immersion in sea water. Apart from a few exceptional shipwreck examples, the typical 1865-S is noticeably abraded, often with deep marks and other sizeable distractions on one or both sides. In circulated grades such as VF and EF the 1865-S is relatively easy to obtain, and such examples have tremendous historic appeal due to their association with the waning days of the California Gold Rush. As one of the three major _treasure ship issues in the Type 1 Liberty Head double eagle series, the 1865-S is also relatively obtainable in Uncirculated grades. More than 600 Mint State examples were salvaged from the shipwreck of the S.S. Brother Jonathan, the coins lost at sea on July 30, 1865 when the side-wheel steamer foundered on an uncharted rock while trying to reach the safety of Crescent City, California. The finest of these shipwreck 1865-S double eagles is a pair of MS-66s certified by PCGS.