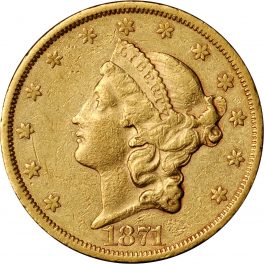 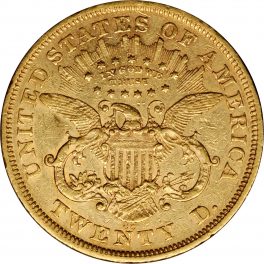 The 1871-CC double eagle is a better produced issue than the 1870-CC with better detail to Liberty’s hair, the obverse stars, and at the borders on both sides. Still, the typical example is not as well struck as most Philadelphia Mint double eagles from the early 1870s and is likely to be somewhat incomplete over the central high points. Heavily abraded surfaces are the norm for the 1871-CC, and most survivors are worn to the point where none of the original luster remains. On the few high grade examples known, the luster is either satiny or modestly semi-prooflike. This is the second rarest Carson City Mint double eagle after the 1870-CC, and survivors are scarce to rare in all grades. This is a heavily circulated issue, most of the few known examples grade no higher than VF. This date and mint is very scarce in EF, rare in AU, and exceedingly rare in Mint State. The finest known 1871-CC double eagle is the MS-64 certified by NGC that Stack’s Bowers Galleries sold in 2012 as part of the fabulous Battle Born Collection of Carson City Mint Coinage.