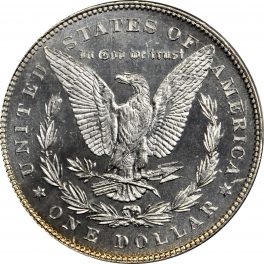 This is one of the final designs of the 1878 Morgan Silver Dollar. It has 7 Tail Feathers and was produced with two major reverse variations. The first is the Second Reverse with 7 Tail Feathers, with parallel top arrow feather (PAF), and concave breast on the eagle. This style is often called the Reverse of 1878. Our estimated production quantity is 7.2 million circulation strikes, with between 250 to 300 Proofs. Close examination of the reverse will reveal excellent breast feather detail with a flat breast. Coins usually have satiny luster on the obverse, while the reverse is frosty. Proof coins usually show light striking above the ear with medium to low cameo contrast. This is a challenging variety to find with good eye appeal. This coin was produced at the Philadlephia Mint, whose mint mark will not show up on the coin.
Circulated Coins Are Worth A Small Premium Over Silver: The date was released in large quantities at the time of striking which provides for a deep supply of circulated pieces to choose from for today’s collectors. Grades of VG up to AU can be found with very little effort, though many low-grade dollars had their fate in crucibles, especially when the price of silver jumped.
Gem Examples Are Widely Available: Another relatively common issue with thousands of specimens to choose from including Gems. Some 1878 7 TF Morgans were found in bag quantities during the Treasury releases of the early 1960s.
Proofs Are Rare For This Morgan Dollars: Probably something in the neighborhood of 150 to 200 Proofs of the variety are extant. As such, they are rare today. Finding one with a complete strike and great eye appeal will present an even greater challenge.

The obverse text on the Morgan Dollar reads “Liberty; E Pluribus Unum; 1878.” The reverse text on the Liberty dollar reads “United States of America; In God We Trust; One Dollar.” The obverse of the silver one dollar coin has a bust of a female facing the left wearing a cap and small crown, with flowers tucked in her hair and stars surrounding the border. The reverse of the Morgan Dollar has an eagle in the center with its wings spread and a wreath surrounding.