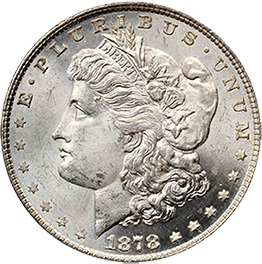 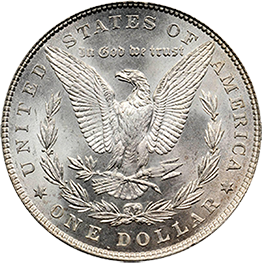 Morgan Silver Dollars are by far the most actively collected series of United States coins.  They were minted from 1878 to 1904 and again in 1921.  Nearly all of the 100 or so major dates and mintmarks are available in Mint State.  Of course that does not mean that all uncirculated Morgan dollars are cheap.  Depending on the date and mintmark, prices for a coin can range from about $30 to $10,000 or more.  Our guide will show you which coins are common and which coins are rare.  Morgan Silver Dollars all have .7735 ounces of silver in them.  So you can multiply that times the current price of silver to find out the absolute minimum your coin should be worth.  As stated previously though, many Morgan Dollars will be collectible because of their rarity and desirability.  You can click on a picture below to learn more about specific years and mintmarks.  And please remember to contact us if you decide to sell your coin or need an honest appraisal and auction estimate.

George T. Morgan, the designer of this coin, was born in Birmingham, England on November 24, 1845. He was educated at the Birmingham Art School and later earned a national scholarship to the South Kensington Art School in London where he received many awards and prizes for his work. After his schooling, the talented Morgan secured a position as an assistant engraver with the British Royal Mint in London, working with well-known engravers J.S. and A.B. Wyon. Generations of the Wyon family worked in this capacity for the Royal Mint. While Morgan was respected for his work, his chances for upward mobility were slim due to the Wyon family’s long ties to the Royal Mint and the likelihood that the sons would be employed for many years.

However, an unexpected opportunity arose for Morgan in 1876. That spring, United States Mint Director Dr. Henry R. Linderman, who anticipated changes within the Mint as well as new coin designs, wrote to London Mint Director Charles W. Fremantle in search of fresh talent. Linderman asked Fremantle to recommend a qualified engraver to come to America and work on redesigning the minor silver coinage at the Philadelphia Mint. Chief Engraver William Barber and his son, Charles, already worked at the Philadelphia Mint under Linderman, but their work fell short of the director’s expectations. Linderman also believed, according to his letters, that the British Mint’s engraving processes were more refined and elegant than those used in American mints. Fremantle highly recommended Morgan, who was trained in all technical aspects of engraving and also in medal and coin production.

The recommendation alone convinced Linderman to hire the 30-year- old Morgan for the job. After corresponding with his new supervisor, Morgan sailed from Liverpool, England and arrived in Philadelphia in October. There he received a warm welcome from Linderman and Mint Superintendent James Pollock, but a much cooler one from the Barbers. In fact, it was so uncomfortable that Morgan did his Mint work at home for a time.

Morgan remained with the Philadelphia Mint for many years, working as assistant engraver under Chief Engraver William Barber until the chief engraver’s death in 1879, after which his son Charles Barber stepped into the position. Morgan was finally named chief engraver in 1917 at the age of 72, upon the death of Charles. Morgan passed away suddenly on January 4, 1925, at his home in the Germantown district of Philadelphia at age 79.

George T. Morgan is most famous for designing the Liberty Head silver dollar that collectors designate with his name. Over a long period of time he produced a variety of pattern coins, many of which are highly admired today for their beauty and all of which are rare. Morgan designed several varieties of 1877 half dollars, the 1879 &quot;Schoolgirl&quot; dollar, and the 1882 “Shield Earring” coins. He also designed many medals.

The Design and Its History

Soon after Morgan first arrived in America, he and Linderman discussed returning to a design with the head Miss Liberty and an eagle on a new silver dollar to replace the Liberty Seated design that had been in use since 1836. The project accelerated in 1878 upon passage of the Bland-Allison Act, legislation that required the Treasury Department to buy $2 million to $4 million worth of silver bullion each month and convert it into standard silver dollars consisting of 90% silver and 10% copper. Linderman launched a design competition between Morgan and Charles Barber, and, ultimately, chose Morgan’s design depicting the profile of an American woman.

Morgan based the design on local teacher Anna Willess Williams, who had been his model for an 1877 pattern half dollar. During the search for the perfect American profile, Morgan rejected several potential models for Miss Liberty until artist Thomas Eakins introduced him to Miss Williams. Morgan was impressed with her profile and described it as the most perfect he had seen in America. Reluctant at first, Miss Williams ultimately agreed to pose under the condition her identity would not be revealed.

During his first two years in the United States, Morgan studied at the Philadelphia Academy of Fine Arts in an effort to expand his knowledge of American art. Morgan wanted to depict a real American woman on the new silver coinage instead of creating an imaginary figure. As for protecting Miss Williams’ anonymity, her identity as the model on the silver dollar was revealed by a newspaper reporter a few years later.

From 1878 to 1921, the same basic design was used on all Morgan silver dollars, with a few modifications to the reverse, resulting in four design variations. The first minted Morgan silver dollars in 1878 depicted an eagle with 8 Tail Feathers, Reverse Type A; the dies were modified soon after to show 7 Tail Feathers, Reverse Type B. The reverse of 1879 depicts a slanted arrow tail feather (SAF), known as Reserve Type C; and lastly, Reverse Type D coined in 1921 depicts a parallel arrow tail feather (PAF).

The obverse on all coins features the portrait of Miss Liberty facing left, E PLURIBUS UNUM and stars surrounding with the date below. The edge of the coin is reeded, with counts ranging from about 180 to 190 reeds.

The Morgan dollar ceased production in 1904 when the supply of silver authorized by Congress ran out. The United States Treasury melted approximately 270 million silver dollars in 1918 to loan the metal to Great Britain. In 1921, additional Morgan dollars were struck to build up the reserve of coins needed to back paper Silver Certificates.

For more interesting facts and an enhanced appreciation of Morgan dollars track down a long-out- of-print two-volume set by Dave Bowers, Silver Dollars and Trade Dollars of the United States: A Complete Encyclopedia. This work, published in 1993, involved many years of research and extensive interviews with collectors, dealers, and Treasury Department people. No study like it has ever been produced, before or since. 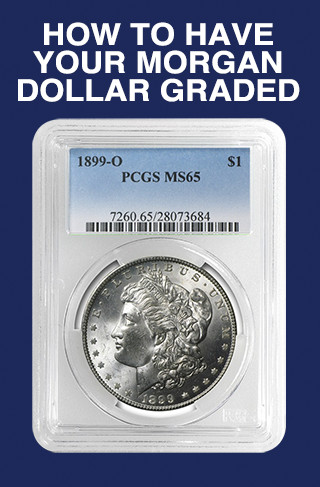