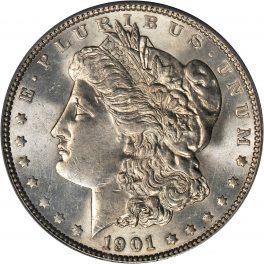 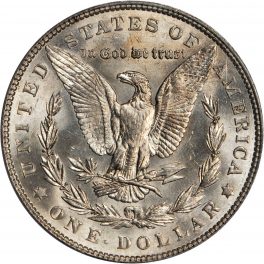 Of all Philadelphia Mint circulation strike dollars in the Morgan series, the 1901 Morgan Silver Dollar is among the rarest dates to be found in Mint State and is second to only the 1896-O in terms of absolute rarity, especially at the gem level. Many 1901 dollars were placed into circulation at or near the time of issue and those that were not were probably melted later under the Pittman Act of 1918. Dollars struck with the earlier style hub, called the C-3 reverse, are typically nicely struck with some exceptions. The later pieces with the C-4 hub are lightly struck. Proofs are usually well struck, with medium cameo contrast. Some struck with the new hub over the old one show slight doubling. Always available and selected by many collectors to represent the date in their collections as Mint State coins are such well-respected rarities. The cameo effect is not often bold for the date so hold on to any Proof with strong contrast and eye appeal. Some Proofs are from the new hub over the old hub style and are interesting to contemplate.
This Coin Will Cost More Than Spot Silver, But Still Affordable: Readily available and relatively inexpensive in grades up to EF; AU coins cost a bit more but are still highly affordable.
This $1 Coin Can be Worth Well More than A Circulate Coin: One of the classic rarities of the series when found in Mint State, with even a Mint State-60 example bringing mid-three figures in the Guide Book listings-nearly 11 times the value of an AU coin. At the gem level the date is a mid-six figure rarity. If and when you find an Uncirculated example that is well-struck and lustrous, no matter the Mint State level, grab it while it’s available! Collectors seeking a 1901 Morgan dollar would do well to search for coins struck from the earlier, sharply struck C-3 reverse.

The obverse text on the Morgan Dollar reads “Liberty; E Pluribus Unum; 1901.” The reverse text on the Liberty dollar reads “United States of America; In God We Trust; One Dollar.” The obverse of the silver one dollar coin has a bust of a female facing the left wearing a cap and small crown, with flowers tucked in her hair and stars surrounding the border. The reverse of the Morgan Dollar has an eagle in the center with its wings spread and a wreath surrounding.