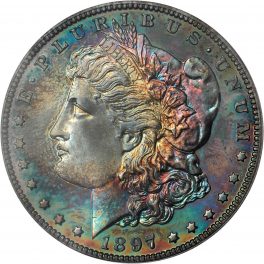 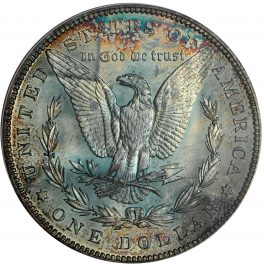 1897 Morgan Silver Dollars were considered rare up through the early decades of the 20th century. Very few examples of the date were released into circulation at the time they were minted. However, bags of 1897 dollars were released in large quantities decades later and by the 1950s mint bags were common in eastern banks. The Treasury released hundreds more bags of the 1897 $1 Silvers from the Philadelphia Mint from 1962 to 1964. Eventually they were second in terms of availability only to the common 1896, causing their worth to drop some. In Mint State the 1897 is usually well struck with frosty luster. Proofs of the date were delivered in quarterly batches beginning in March of the year. Like their 1896 counterparts, Proofs are generally boldly struck and deliver lively cameo contrast. There are exceptions to every rule so choose carefully.
No Problem Finding Circulated Examples of 1897 Morgan Silver Dollars: Always available but the proliferation of low-priced Mint State coins allow collectors to avoid such grades as EF and AU.
Snag a Good Coin for Little Expense: If you are looking for a well-struck and lustrous example of the date chances are good you will have little difficulty finding such a coin. Steer clear of bagmarked coins, especially in the lower Uncirculated grades. Gems present no major difficulty and are not overly expensive.

The obverse text on the Morgan Dollar reads “Liberty; E Pluribus Unum; 1897.” The reverse text on the Liberty dollar reads “United States of America; In God We Trust; One Dollar.” The obverse of the silver one dollar coin has a bust of a female facing the left wearing a cap and small crown, with flowers tucked in her hair and stars surrounding the border. The reverse of the Morgan Dollar has an eagle in the center with its wings spread and a wreath surrounding.