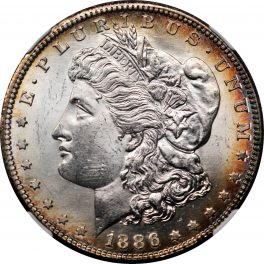 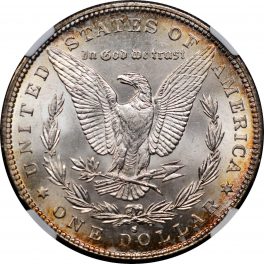 The San Francisco Mint produced the smallest tally for Morgan silver dollars of any mint this year. Nearly all 1886-S Morgan Silver Dollar coins have excellent eye appeal. Few were released into circulation upon production. It is believed that hundreds of thousands were melted under the 1918 Pittman Act. Additional coins were released into circulation from the San Francisco Mint in the mid-1920s, then more in the 1940s and 1950s. An above average strike is the rule for this mintage, with some searching required to find examples with a very sharp strike. The luster is typically of high quality and is worth more than matte examples. No proofs were produced at this mint.
The 1886 $1 Silver Coin is not Rare, But it is Not Commonly Sought After: Not many circulated examples of the date are available; they are not rare but they are difficult to locate with any regularity and when found are often EF to AU.
The Key to Mint State is Finding the Highest Grade for the Lowest Price: Quantities of Mint State 1886-S Morgans were made available throughout the 1940s and 1950s to all interested parties, including Nevada gaming houses. This was a boon to collectors as the date was considered one of the rarest prizes among Morgan dollars prior to that era. Today there is no shortage of Mint State coins at the MS-64 and 65 levels and with a sprinkling of even finer coins available to those with great patience. An MS-64 with lively luster and a crisp strike will be an engaging addition to a growing Morgan dollar set.

The obverse text on the Morgan Dollar reads “Liberty; E Pluribus Unum; 1886.” The reverse text on the Liberty dollar reads “United States of America; In God We Trust; One Dollar; S.” The obverse of the silver one dollar coin has a bust of a female facing the left wearing a cap and small crown, with flowers tucked in her hair and stars surrounding the border. The reverse of the Morgan Dollar has an eagle in the center with its wings spread and a wreath surrounding.