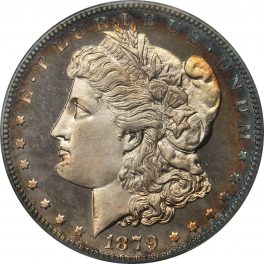 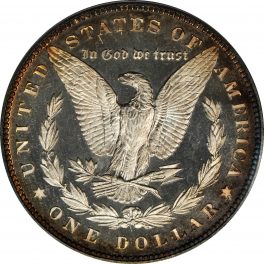 Philadelphia Mint 1879 dollars are plentiful in both circulated and Mint State grades, no surprise given its mintage of nearly 15 million coins. The quality of Mint State coins varies in strike and luster. All 1879 Morgan silver dollars have the Third Reverse type with slanting top arrow feather (SAF) and convex breast on the eagle. Most Mint State dollars are well struck, yet many exist with flat breast feathers on the eagle and buyers are advised to look for sharply struck coins_which should not present a problem. Certified coin holders do not take strike into consideration. For any and all Morgan dollars, cherrypicking for strike and eye appeal will pay dividends and costs no more. Lower grade Mint State coins are likely to be heavily bagmarked from decades of Treasury storage, moving, and counting. Circulation strike coins are usually well struck, though many show a lightness of center details noticeable above the ear of Miss Liberty. This was due in part to imprecise spacing and/or the fact that dies were used for a long time in the presses.
1879-P Morgan Are Generally Very Common: All circulated grades desired can be found for this Philadelphia Mint issue, though many lower grade coins find their way to melting pots whenever silver spikes in value. Pleasing AU examples abound. These were sent into circulation in large numbers at the time of striking.
Gem 1879 $1 Coins Were Saved In Treasury Bags: Large supplies of this date have always been available, even in the 1950s when bag quantities changed hands with regularity. By the time of the Treasury releases in the early 1960s Uncirculated supplies of the date in the hands of Uncle Sam had been all but exhausted. Any Mint State grade can be found today, even at the Gem level though coins that might be considered ultra-gem in quality are not so common.
Proofs Are Available, But Not Cheap: Probably more than half the Proof mintage for the date can be found today. Proofs are readily available to all who seek an example. Proofs of the date are sometimes lacking in aesthetic quality and wise collectors seek out those examples with bold details, some cameo contrast, and exceptional eye appeal_such Proofs are in the minority for the date. Again, cherrypicking for quality is the way to go. Probably, fewer than 10% of buyers do this, as most rush for completion.

The obverse text on the Morgan Dollar reads “Liberty; E Pluribus Unum; 1879.” The reverse text on the Liberty dollar reads “United States of America; In God We Trust; One Dollar.” The obverse of the silver one dollar coin has a bust of a female facing the left wearing a cap and small crown, with flowers tucked in her hair and stars surrounding the border. The reverse of the Morgan Dollar has an eagle in the center with its wings spread and a wreath surrounding.