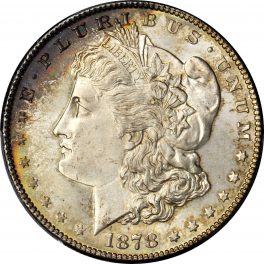 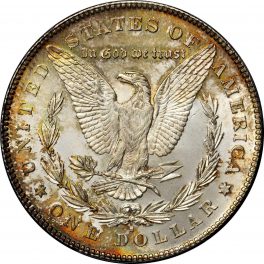 Mint State examples of the 1878-S Morgan silver dollar are plentiful, with many in MS-62 to MS-64. Like the 1878-CC Morgan dollar, this variety minted in San Francisco has the flat eagle’s breast, seven tail feathers, and parallel top arrow feature (PAF). Most examples are well struck with excellent luster. Many of the Mint State coins are heavily bagmarked. Some pieces show planchet striations on the face of Miss Liberty as well as some weakness at the lower part of the eagle. Prooflike examples are common, with at least 15,000 to 30,000 in existence. But remember that Prooflike doesn’t mean that they are proofs. Since this is a branch mint, no proofs were struck.
Most Collectors Prefer An Uncirculated 1878-S $1 Coin: EF and AU examples of the date are in abundance today though lower grade coins are not so easy to come by; fortunately, there is no great demand for low-grade pieces. There isn’t much of a price difference between heavily circulated coins and sliders, so most collectors want the coin with more eye appeal.
High Grade 1878-S Morgan Dollars Are Common: This is one of the most plentiful dates in the Morgan dollar series and tens of thousands no doubt exist. All grades from MS-60 up to the ultra-gem category can be found, the latter, of course, with some degree of difficulty. This date was stored in bag quantities in San Francisco and other locales, with numerous bags released in the early 1960s by the Treasury. Many bags found their way to Las Vegas for use in one-armed bandits.

The obverse text on the Morgan Dollar reads “Liberty; E Pluribus Unum; 1878.” The reverse text on the Liberty dollar reads “United States of America; In God We Trust; One Dollar; S.” The obverse of the silver one dollar coin has a bust of a female facing the left wearing a cap and small crown, with flowers tucked in her hair and stars surrounding the border. The reverse of the Morgan Dollar has an eagle in the center with its wings spread and a wreath surrounding.