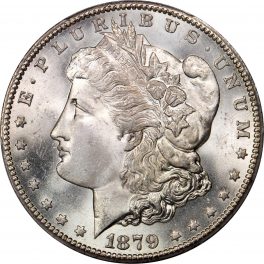 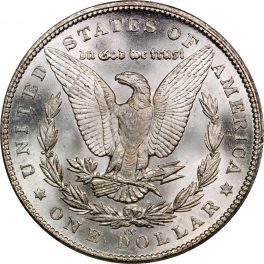 The 1879-CC Morgan silver dollars were rare in their own time. Today, the coin is the first key or rare variety in the Morgan dollar series and is the second rarest of all Carson City Morgans after 1889-CC. All are of the Third Reverse_slanted top arrow feather, convex breast on eagle, type. There are two major varieties. The first is the Large CC over Small CC, the oft-called “Capped Die” variety, on which there was an attempt at the Mint to tool away the small CC, so larger letters could be stamped in that area. The second variety is the so-called Perfect, or “normal” CC issue, which has a larger CC mintmark. The Large CC variety is the more available of the two and is also more popular than the Large CC over Small CC. Most 1879-CC dollars are well struck on obverse and reverse. Coins typically have attractive luster, with some examples frostier than others, while still others are dull and lifeless. Please remember that since this is a branch mint coin, no proofs were struck.
Even Circulated 1879-CC Coins Sell For Nice Premiums: Circulated coins exist from VG up to AU, though they are as scarce as Mint State pieces for the most part. A pleasing AU example of the date is something to brag about for this issue.
MS Morgans from 1879-CC Are Rare: Mint State coins are always available, although the quality tends to hover in the MS-61 to 62 range; above those grades the date becomes a challenge. Gems are available though they are the exception for this date. Most collectors settle for one or the other of the two major varieties of the year while others own both varieties. The MS-64 grade is optimal for this date it represents high quality without the high cost associated with finer grades.

The obverse text on the Morgan Dollar reads “Liberty; E Pluribus Unum; 1879.” The reverse text on the Liberty dollar reads “United States of America; In God We Trust; One Dollar; CC.” The obverse of the silver one dollar coin has a bust of a female facing the left wearing a cap and small crown, with flowers tucked in her hair and stars surrounding the border. The reverse of the Morgan Dollar has an eagle in the center with its wings spread and a wreath surrounding.