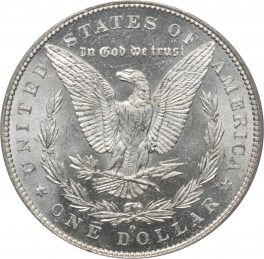 The New Orleans Mint reopened in 1878 and was refurbished. In 1879 the mint struck 1879-O Morgan silver dollars and also a limited number of double eagles. After 1879 the New Orleans Mint intermittently struck various denominations until it closed in 1909. Morgan dollars were made there from 1879, as here, until 1904. The 1879-O dollar is plentiful in lower Mint State levels from 60 through 63. MS-64 coins are scarce and in proportion to the demand for them, MS-65 pieces are rare. Coins in AU grade, once called “slider Uncirculated,” are plentiful. Circulation strikes vary from sharp to average or below average. Luster is typically frosty and attractive, although bagmarks are a huge problem. It is believed that 12 Branch Mint Proofs were struck on February 20, 1879, to commemorate the reopening of the New Orleans Mint, but fewer than six have been traced to date.
This Is A Common Coin, But Still Popular In Low Grades: The 1879-O is available in circulated grades from well-worn up to AU with such high-end circulated pieces in abundance. Look for an AU with as few bagmarks as possible.
MS 1879-O Morgan Dollars Are Now Common: The date exists in large numbers in Mint State with examples ranging from the low end of the spectrum up to and including the Gem MS-65 grade. Prior to the 1950s this date was looked upon as a scarcity in any grade, especially Mint State, but by 1957 bag quantities had been released and the value of the date plummeted. Thankfully the value has rebounded in the 21st century. We suggest that MS-64 is the ideal grade for this date_plenty of eye appeal but easy on the wallet. Just be certain to cherrypick the specimens with the fewest bagmarks.

The obverse text on the Morgan Dollar reads “Liberty; E Pluribus Unum; 1879.” The reverse text on the Liberty dollar reads “United States of America; In God We Trust; One Dollar; O.” The obverse of the silver one dollar coin has a bust of a female facing the left wearing a cap and small crown, with flowers tucked in her hair and stars surrounding the border. The reverse of the Morgan Dollar has an eagle in the center with its wings spread and a wreath surrounding.