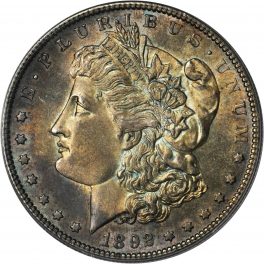 The 1892-S Morgan Silver Dollar is one of those United States coins that are common in worn states but extremely rare in MS-65, and therefore worth considerably more. Many if not most of this mintage was placed into circulation near the time of issue, while very few were saved in Mint State. The strike on the 1892-S is usually above average and the coins have a satiny or prooflike luster. Since San Francisco is a branch mint, no proofs were produced here.
Easy Find in Low Grades Because of Immediate Placement into Circulation: Much easier to find in circulated grades than in Mint State, the 1892-S is elusive $1 coin, but available in EF and AU. This is among the dates that are frequently found in circulated grades in Mint State Morgan dollar sets.
Purchase Your Mint State Coins Cautiously: A rare prize in all Mint State grades from MS-60 right on up to gem quality-the farther up the Mint State ladder one travels, the rarer and more expensive this date becomes. Looking for a nicely struck coin won’t be a daunting task for this date. Beware of “sliders,” coins that look Uncirculated at first glance but betray wear at closer inspection-these are sometimes offered as Mint State coins!

The obverse text on the Morgan Dollar reads “Liberty; E Pluribus Unum; 1892.” The reverse text on the Liberty dollar reads “United States of America; In God We Trust; One Dollar; S.” The obverse of the silver one dollar coin has a bust of a female facing the left wearing a cap and small crown, with flowers tucked in her hair and stars surrounding the border. The reverse of the Morgan Dollar has an eagle in the center with its wings spread and a wreath surrounding.