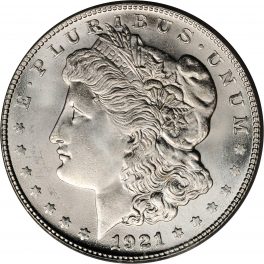 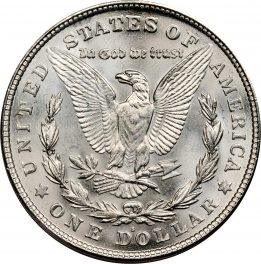 Like the Philadelphia and Denver facilities, the San Francisco Mint was pressed into service to strike large quantities of new 1921-S Morgan Silver Dollar. Coinage started on May 9, 1921. Similar to the 1921-D, the 1921-S dollars have a tiny, micro-S mintmark. This issue is common in all grades including Mint State, but is seen less often than those minted in Philadelphia and Denver for the same year. 1921 marks the last year that the San Francisco mint produced Morgan dollars. Most coins are shallowly struck on Miss Liberty’s hair and on the reverse. Keep in mind that since this was a branch mint, no proof coins were struck.
Circulated 1921-S $1 Coins Are Mostly Worth Silver: Always available but seldom sought for collections owing to the plenitude of Mint State coins.
MS Coins Are Very Common: Another “name your grade” date, the 1921-S can be obtained right up to gem MS-65 without much difficulty. Buyers should look for a gem with a bold strike and great aesthetics for a winning combination. Just be prepared to examine many examples before the above combination is found.

The obverse text on the Morgan Dollar reads “Liberty; E Pluribus Unum; 1921.” The reverse text on the Liberty dollar reads “United States of America; In God We Trust; One Dollar; S.” The obverse of the silver one dollar coin has a bust of a female facing the left wearing a cap and small crown, with flowers tucked in her hair and stars surrounding the border. The reverse of the Morgan Dollar has an eagle in the center with its wings spread and a wreath surrounding.