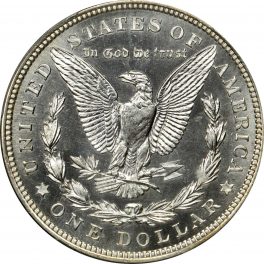 The 1921 Morgan silver dollar is by far the most plentiful today of any date in the Morgan series. In this year the Treasury caused tens of millions of coins to be struck to provide backing for Silver Certificates. The Mint redesigned the Morgan dollar this year-the old Morgan hubs were destroyed in 1910-and the new coin was in more shallow relief at Miss Liberty’s portrait on the obverse and with a flatter reverse than the older dates in the series. All of the 1921 dollars look different from those produced from 1878 to 1904. Due to the nature of the dies, the strike on all 1921 dollars is apt to be shallow. Most coins show additional weakness on the reverse among the lower wreath leaves. Luster is usually satiny rather than frosty, but many specimens are dull or grainy. Most Proofs possess the same highly polished deep mirror surface typical of the 19th century Proof Morgan dollars. Some may have slight tinges of graininess near the rims. Contrast is average.
Circulated 1921 Morgans Are Just Worth Their Silver Value: This plentiful date can be found in just about any circulated grade imaginable though it is a date that generally goes to the melting pot in times of high silver value. This coin was minted at the Philadelphia Mint.
Gem Coins Are Common But Marketable: Millions of coins exist in Mint State! Name your grade and it’s yours, though, of course, gems are not as common as you might think. A solid gem MS-65 or finer coin with bold details and lively luster is a prize waiting to be plucked by today’s discerning collectors.
1921 Proofs Exist, But Buy Carefully: There are so-called “Zerbe” Proofs of the date that were supposedly ordered by Farran Zerbe, but most collectors today do not consider the pieces with the Zerbe designation to be Proofs in the true sense. No Zerbe documentation has ever been found, and the matter may be a fantasy. Even so, they are certified as such. On the other hand there are “Chapman” Proofs of the year that more closely answer the calling of Proof Morgan dollars. Perhaps 25 to 30 or so were forthcoming from the Mint in Philadelphia, most of which were offered in early 1922 by dealer Henry Chapman. These have the earmarks of earlier Proofs-flashy, reflective fields, and there is some slight cameo contrast on a few specimens. These appear only infrequently in the marketplace and authentication is mandatory for those unfamiliar with the issue.

The obverse text on the Morgan Dollar reads “Liberty; E Pluribus Unum; 1921.” The reverse text on the Liberty dollar reads “United States of America; In God We Trust; One Dollar.” The obverse of the silver one dollar coin has a bust of a female facing the left wearing a cap and small crown, with flowers tucked in her hair and stars surrounding the border. The reverse of the Morgan Dollar has an eagle in the center with its wings spread and a wreath surrounding.