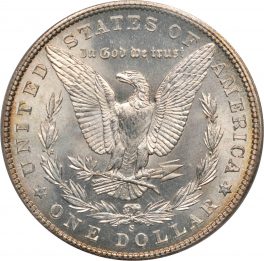 The 1904-S Morgan silver dollar in Mint State is an excellent example of a coin that was readily available on the market in the 1950s, but which was not represented in the abundant Treasury releases of 1962-1964, and today is considered quite rare. The 1904-S is one of the key issues in the Morgan series. Mint State pieces are elusive and when found the strike is apt to be shallow and the luster average or poor. Some careful searching is required to find specimens with a sharp strike. You won’t find any proof issues because this is a branch mint coin.
Circulated 1904 San Francisco Coins Are Still Relatively Common: EF and AU coins can be found with little difficulty if you desire an example, but look for one with minimal marks and some luster for a good choice.
This Is A Key Date And Valuable Coin In MS Grades: In the past, few bags of this date were ever forthcoming from the mint at San Francisco, though the Treasury in Washington, DC released some in the 1930s and 1940s, with a few others released in the 1950s. To our knowledge, no bags saw the light of day during the Treasury releases of the early 1960s. This is an elusive date in MS-60 and finer, with a thinning population at MS-63 and higher the cause of the date’s high market value-four figures and up-for any Mint State specimen. Find a Mint State-64 piece with strong design details and frosty luster and you will have an example to crow about.

The obverse text on the Morgan Dollar reads “Liberty; E Pluribus Unum; 1904.” The reverse text on the Liberty dollar reads “United States of America; In God We Trust; One Dollar; S.” The obverse of the silver one dollar coin has a bust of a female facing the left wearing a cap and small crown, with flowers tucked in her hair and stars surrounding the border. The reverse of the Morgan Dollar has an eagle in the center with its wings spread and a wreath surrounding.