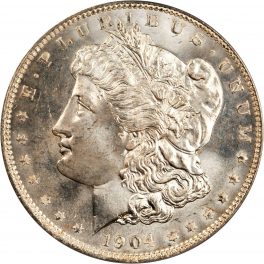 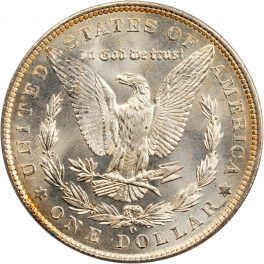 The 1904-O Morgan silver dollar coinage represents the last production of this denomination at the New Orleans Mint. After a few hundred thousand were released, the rest went into storage until 1929, when about 10 million of various dates were transferred to a vault in the Philadelphia Mint. Today, the 1904-O is the most plentiful of the three former New Orleans Mint rarities-1898-O, 1903-O, and 1904-O-that launched the Treasury release of 1962. The dollars are usually very brilliant and attractive. Strike quality varies from average to below average, but specimens with sharp strikes can be found with some searching. Branch mint coins typically did not issue proof coins, so none will be found on this series.
These Circulated Morgans Are Mostly Worth Silver: Always available in EF and AU though few collectors choose this route because of the common and affordable nature of the date in grades such as choice and gem Uncirculated.
Today MS 1904-O $1 Coins Are Common: All Mint State grades up to and including gem are readily available to today’s collectors, a far cry from a century ago when the date was considered very rare in Mint State. MS-64 and MS-65 are grades we recommend, but be sure to find one with solid central details.

The obverse text on the Morgan Dollar reads “Liberty; E Pluribus Unum; 1904.” The reverse text on the Liberty dollar reads “United States of America; In God We Trust; One Dollar; O.” The obverse of the silver one dollar coin has a bust of a female facing the left wearing a cap and small crown, with flowers tucked in her hair and stars surrounding the border. The reverse of the Morgan Dollar has an eagle in the center with its wings spread and a wreath surrounding.