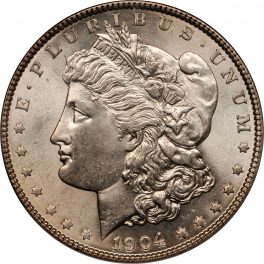 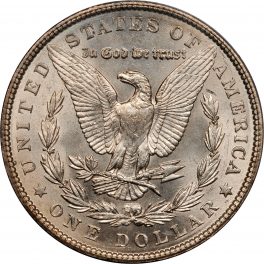 In 1904 the supply of silver authorized by Congress for the minting of dollars ran out, and after this year coinage was terminated. With the production of 1904 Morgan silver dollars coming to an end and with the dies and hubs about to be put into storage, the quality of this mintage from Philadelphia was poor compared to previous years. Intense cherrypicking is required to find a gem or a well-struck specimen. The strike quality varies, with most dollars being poorly struck. The luster is usually fairly shallow, not at all deep or flashy. There have been exceptions. In the 1980s Bowers and Merena Galleries handled a group of several dozen beautifully toned MS-65 grade coins that had likely been obtained from the Mint at the time of issue. Proofs show some lightness at the centers with an undesirable “chrome” look to the motifs and fields. Finding an example with good strike and eye appeal can be challenging to say the least. In the early 20th century, Proof 1904 dollars were involved in a market speculation, as related by Dave Bowers in Silver Dollars and Trade Dollars of the United States: A Complete Encyclopedia, 1993.
If Circulated, These Coins Are Basically Worth Silver: EF and AU can be located without much difficulty, but even in those grades the coins are just going to sell for a small premium over the coin’s silver melt value.
Be Picky When Buying An MS Philadlephia Mint 1904 Morgan: Always available in Mint State grades up to and including gem-quality pieces. Look for a well-struck and boldly lustrous piece-they form the minority so look long and hard and then choose carefully. A MS-64 example makes a great addition to a Morgan dollar collection.

The obverse text on the Morgan Dollar reads “Liberty; E Pluribus Unum; 1904.” The reverse text on the Liberty dollar reads “United States of America; In God We Trust; One Dollar.” The obverse of the silver one dollar coin has a bust of a female facing the left wearing a cap and small crown, with flowers tucked in her hair and stars surrounding the border. The reverse of the Morgan Dollar has an eagle in the center with its wings spread and a wreath surrounding.