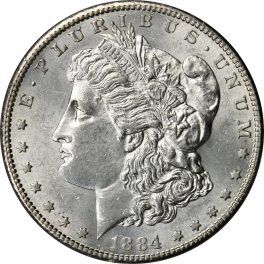 1884-S Morgan Silver Dollars were placed into circulation, which was uncommon for the Morgan dollar series. Usually, large quantities of the series were bagged and stored, only to be released decades later. Some undistributed bags were likely melted under the provisions of the 1918 Pittman Act. On the market today, Uncirculated coins from the San Francisco mint are both highly prized and worth more than other $1 silver coins from this same year. In worn grades the issue is more common. The San Francisco mint did not produce any proofs since it was a branch mint.
Expect Lower Grades for Circulated 1884-S Morgan Dollars: Many are the circulated 1884-S dollars in the marketplace today with enough EF and AU pieces to satisfy any collector. Most of the mintage saw immediate use in local commerce and the majority of worn specimens seen today are VF or lower.
Higher Grade Coin Can See Five Digit Values: In grades of MS-60 to 62 the date presents a serious four-figure challenge to collectors. At MS-63 and above “rarity” becomes the operative word as the value climbs well into the five-figure range, with the value escalating even higher yet in MS-64 or finer.

The obverse text on the Morgan Dollar reads “Liberty; E Pluribus Unum; 1884.” The reverse text on the Liberty dollar reads “United States of America; In God We Trust; One Dollar; S.” The obverse of the silver one dollar coin has a bust of a female facing the left wearing a cap and small crown, with flowers tucked in her hair and stars surrounding the border. The reverse of the Morgan Dollar has an eagle in the center with its wings spread and a wreath surrounding.