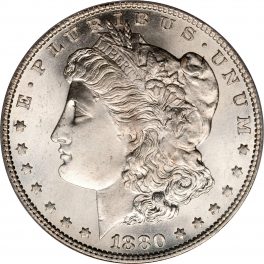 1880-O Morgan silver dollars were released into circulation around the time they were minted and in dribs and drabs in later years. All were minted with the Reverse of 1879 (SAF), with rounded eagle’s breast and slanted arrow top feathers. To continue the theme of the 1880 dollar, a number of dies were overdated and may show traces of earlier digits. Striking varies from strong to soft, but most examples are above average. Luster varies from satiny to greasy. No proofs were minted at the New Orleans Mint.
Circulated 1880-O $1 Coins Are Common: All grades from Fine to AU are represented in quantity in today’s marketplace and anyone working on a circulated set of Morgans will have no difficulty finding a suitable example.
Availability in Mint State grades: Generally available in all grades up to and including Gem MS-65; even finer specimens are known though they tend to be elusive. Many bags of this date emerged from hiding in the mid-1950s and were a main source of today’s Mint State specimens.
Further Variety Explanation: 1880-O with 80 over 79 coins were made in several die combinations for circulation and represent the use in 1880 of 1879-dated dies that were on hand in the die department of the Philadelphia Mint.

The obverse text on the Morgan Dollar reads “Liberty; E Pluribus Unum; 1880.” The reverse text on the Liberty dollar reads “United States of America; In God We Trust; One Dollar; O.” The obverse of the silver one dollar coin has a bust of a female facing the left wearing a cap and small crown, with flowers tucked in her hair and stars surrounding the border. The reverse of the Morgan Dollar has an eagle in the center with its wings spread and a wreath surrounding.