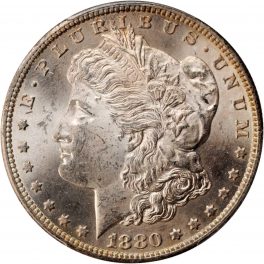 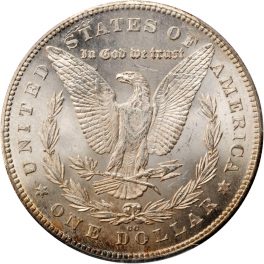 The 1880-CC Morgan silver dollar was minted in two varieties: the Reverse of 1878 (PAF), with flat breast and parallel top arrow feather, as shown here, and the Reverse of 1879, (SAF), with slanted top arrow feather. Of the two, the reverse of 1878 is several times scarcer, but there are enough in the marketplace that finding a choice example should not be too much of a challenge. The strike is generally quite good, with well-defined feathers and typically with attractive frosty surfaces. It is likely that between 10% and 20% of all Mint State 1880-CC Morgan dollars are of this variety. (Since this is a branch mint coin, no proofs were struck.)
Even Circulated 1880-CC Coins Are In Demand: The 1880-CC dollar is available in every grade from well-worn VG or so right up to AU.
MS Carson City Margins Are Still Plentiful: Readily available in Mint State up to and including MS-65; there are also plenty of Uncirculated pieces graded finer than MS-65, and specialists tend to zero in on these when available. Look for a pleasing MS-64 example with a minimal amount of contact marks on the surfaces.
More Variety Info: 1880-CC Reverse of 1878 with 80 over 79 and also with 8/7 were made in several die combinations for circulation and represent the use in 1880 of 1879-dated and 187 partially-dated dies that were on hand in the die department of the Philadelphia Mint.

The obverse text on the Morgan Dollar reads “Liberty; E Pluribus Unum; 1880.” The reverse text on the Liberty dollar reads “United States of America; In God We Trust; One Dollar; CC.” The obverse of the silver one dollar coin has a bust of a female facing the left wearing a cap and small crown, with flowers tucked in her hair and stars surrounding the border. The reverse of the Morgan Dollar has an eagle in the center with its wings spread and a wreath surrounding.