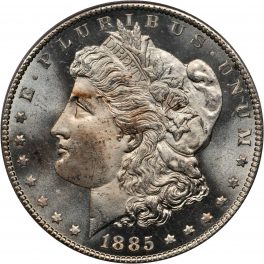 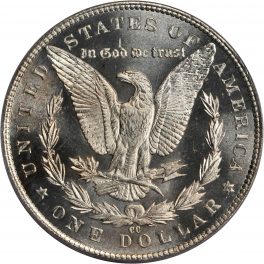 More than half of the original mintage of the 1885-CC Morgan Silver Dollar survived and was distributed in the late 20th century. Most examples are brilliant and lustrous with nice eye appeal. Today, the 1885-CC is the rarest of all Morgan dollars in circulated grades, more so than the 1889-CC and 1893-S. This was the last coin of any type struck at the Carson City Mint which was closed in November 1885 until 1889 when the facility reopened. Strikes range from weak to sharp, but most examples have above average strike quality and brilliant, frosty luster. No proofs were produced for the branch mint.
Circulated $1 1885-CC Coins are Worth Less Than Their UNC Counterparts: Relatively very few examples of the date exist in circulated grades and when seen are apt to be VF to EF or so with a small population of “slider” AU pieces also available.
Common Coins That Could Be Difficult to Track Down: Though this is the Carson City Morgan dollar date with the smallest mintage, it exists in just about any Mint State grade today’s collectors could desire. Many Uncirculated 1885-CC dollars entered the marketplace in the early 1960s and still others were released in the 1970s during the GSA offerings. It is estimated that 65% of all Mint State 1885-CC dollars were released by the GSA in the early 1970s.

The obverse text on the Morgan Dollar reads “Liberty; E Pluribus Unum; 1885.” The reverse text on the Liberty dollar reads “United States of America; In God We Trust; One Dollar; CC.” The obverse of the silver one dollar coin has a bust of a female facing the left wearing a cap and small crown, with flowers tucked in her hair and stars surrounding the border. The reverse of the Morgan Dollar has an eagle in the center with its wings spread and a wreath surrounding.