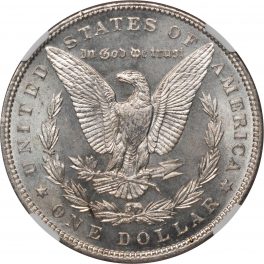 A comparatively low number of Philaldephia Mint 1899 Morgan Silver Dollars were struck and very few were released into circulation at the time of production. The low mintage figure has always appealed to collectors and investors who figured these coins to be worth more. Treasury releases during the 1950s and 1960s brought many bags out from long term storage. Despite its low mintage, however, the 1899 dollar is plentiful on the market, while scarce in circulated worn grades. In Mint State, the 1899 is readily available. Striking quality varies from average to sharp and the luster is usually satiny and attractive. Proof dollars have fairly good contrast but not as “cameo” as in issues of preceding years. As with many other Proof dates of the era, the entire mintage was delivered in quarterly deposits in March, June, September, and December of the year. Cameo contrast can be elusive for this date though a deliberate search for such a coin will yield positive results.
Hard $1 Coin to Find Because of Limited Release: Though available in circulated grades, it can be a challenge to locate a pleasing EF or AU coin; not a lot of 1899 Morgans made it into commerce.
Surprisingly Easier to Find Than Some Circulated 1899 Morgan Dollars: Always available with some searching, this date is almost always seen in Uncirculated grades ranging from the low end to the high end of the scale. MS-64 coins with solid luster and a crisp strike make grand additions to Morgan dollar sets and are highly affordable in today’s marketplace.

The obverse text on the Morgan Dollar reads “Liberty; E Pluribus Unum; 1899.” The reverse text on the Liberty dollar reads “United States of America; In God We Trust; One Dollar.” The obverse of the silver one dollar coin has a bust of a female facing the left wearing a cap and small crown, with flowers tucked in her hair and stars surrounding the border. The reverse of the Morgan Dollar has an eagle in the center with its wings spread and a wreath surrounding.