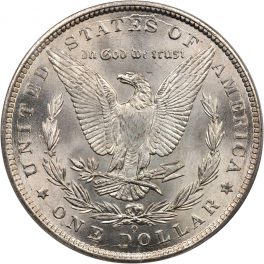 The 1899-O Morgan Silver Dollar was among the Morgan dollar issues released by the Treasury Department in great numbers in 1962. Most known 1899-O dollars are in Mint State, ranging in grade from MS-60 up through MS-65, with a much smaller number earning grades of MS 66 and higher, therefore making them worth more. The striking on this mintage varies from flat to excellent. Beautiful gems can be found with some careful searching. Most examples are lustrous and attractive. Prooflike coins are scarce but when found in high grades many offer cameo contrast. No proofs were produced in the New Orleans mint.
Another $1 Coin Where it May be Tough to Find Circulated Coins: Available to an extent in EF and AU, though circulated examples are not easily found.
UNC Are Plentiful Because of Mint Releases: From MS-60 on up to the gem MS-65 category, the 1899-O is heavily represented in today’s numismatic marketplace. Look for a pleasing MS-65 with strong details and sparkling luster and you will own a worthwhile example of the date.
Treasure hunting: Most 1899-O dollars were made with a medium round O mintmark and with an open 99 in the date. A very few, possibly below 1%, were made with a small round o or “Micro o” mintmark. Three die combinations are known-VAM 4, 5, and 6. Choice and gem specimens are worth thousands of dollars. Most have not been identified in the general marketplace, so treasure hunting can pay rewards!

The obverse text on the Morgan Dollar reads “Liberty; E Pluribus Unum; 1899.” The reverse text on the Liberty dollar reads “United States of America; In God We Trust; One Dollar; O.” The obverse of the silver one dollar coin has a bust of a female facing the left wearing a cap and small crown, with flowers tucked in her hair and stars surrounding the border. The reverse of the Morgan Dollar has an eagle in the center with its wings spread and a wreath surrounding.