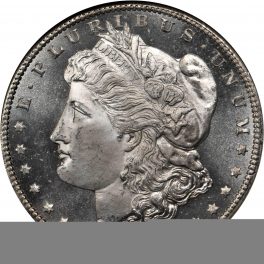 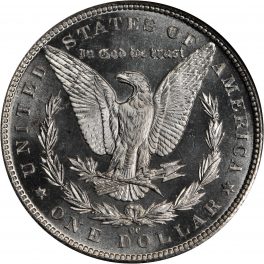 While the mintage of the 1890-CC Morgan Silver Dollar was the largest in the Carson City series, the quantity produced this year does not mean that Mint State pieces are plentiful today. Large quantities were likely released into circulation in the 19th century, and many bags were presumably later melted under the provisions of the 1918 Pittman Act. In 1964, the Treasury took stock of its remaining holdings and found that only 3,949 1890-CC dollars remained. Most 1890-CC dollars are nicely struck and have an attractive luster, while some will show bagmarks. No proofs were produced at this Carson City mint.
You May Have Trouble Finding a High Grade Circulated $1 Silver Coin: Not often seen in circulated grades though an occasional well-worn specimen shows up. EF and AU are elusive grades but can be tracked down with patience.
High Grade UNCs Will be Tough to Find: Not as available as some might imagine given the mintage figure. Still, the date can be found in MS-63 or 64 with no real difficulty-anything beyond that and the scarcity becomes notable and worth much more. Look for a sharp strike and lively luster.

The obverse text on the Morgan Dollar reads “Liberty; E Pluribus Unum; 1890.” The reverse text on the Liberty dollar reads “United States of America; In God We Trust; One Dollar; CC.” The obverse of the silver one dollar coin has a bust of a female facing the left wearing a cap and small crown, with flowers tucked in her hair and stars surrounding the border. The reverse of the Morgan Dollar has an eagle in the center with its wings spread and a wreath surrounding.