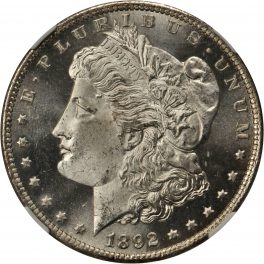 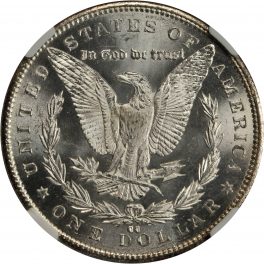 The 1892-CC Morgan Silver Dollar has been in great demand over the years. Hundreds of thousands of these $1 coins were circulated in the late 19th century. A relatively small number of coins were stored by the Treasury and dispersed in later decades. Most dollars are well struck and attractive, usually very lustrous. The Carson City mint did not produce any proofs of the 1892-CC Morgan $1 coin.
Staying Away From Scratches is Key With These Circulated Coins: Available in EF and AU, and frequently seen in far lesser grades. Look for an AU with few marks for optimum value in a circulated coin. We think that adding one of these circulated coins will be worth it for your collection in the long run.
GSA Gave Buyers a Chance to Own These Great UNC Coins: Many bags of this date were paid out by the Treasury as far back as 1927 and again in the 1940s and 1950s. By the time of the GSA sales in the early 1970s, there was but a solitary example of the date on hand. MS-63 and 64 are grades that can be found without much difficulty, and higher grades are available for those who pursue gem quality. Avoid weakly struck pieces with average luster for those represent a minority of available specimens-go for the gold instead!

The obverse text on the Morgan Dollar reads “Liberty; E Pluribus Unum; 1892.” The reverse text on the Liberty dollar reads “United States of America; In God We Trust; One Dollar; CC.” The obverse of the silver one dollar coin has a bust of a female facing the left wearing a cap and small crown, with flowers tucked in her hair and stars surrounding the border. The reverse of the Morgan Dollar has an eagle in the center with its wings spread and a wreath surrounding.