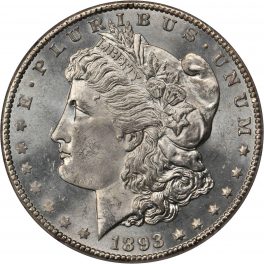 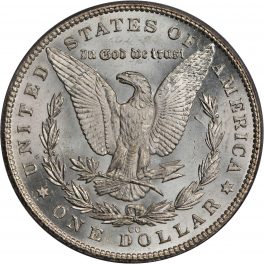 The 1893-CC Morgan Silver Dollar is the last of the Carson City dollars and as such it has always been a collector favorite. Examples are much loved and highly desired by numismatists, both for their rarity and the distinction of being the last Carson City Mint coin of its denomination. The Carson City Mint was closed this year to further coinage but remained in business until 1900 as an assay office and refinery, thus ending an era in American coinage and numismatic history. No 1893-CC Morgan Silver Dollar proofs were produced since this was a branch mint.
Lower Grades Should be Easiest to Find: The date is fairly well represented in circulated grades in today’s marketplace, though EF and AU coins tend to be somewhat elusive.
Great $1 Coin That Will be Worth the Searching: MS-60 to 62 coins are typically available in the marketplace; finer grades are exponentially rarer as the grade increases. Bag quantities of the date were released as early as 1920, with more in the 1950s, especially to coin dealer Harry J. Forman. By 1964 the Treasury had just one example of the date in their holdings. Many 1893-CC Morgans are heavily marked and patience is suggested to find the right coin with minimal blemishes and lively luster. Shoot for MS-63 with few marks and a crisp strike-especially on the reverse-and you will have an exceptional example of the date.

The obverse text on the Morgan Dollar reads “Liberty; E Pluribus Unum; 1893.” The reverse text on the Liberty dollar reads “United States of America; In God We Trust; One Dollar; CC.” The obverse of the silver one dollar coin has a bust of a female facing the left wearing a cap and small crown, with flowers tucked in her hair and stars surrounding the border. The reverse of the Morgan Dollar has an eagle in the center with its wings spread and a wreath surrounding.