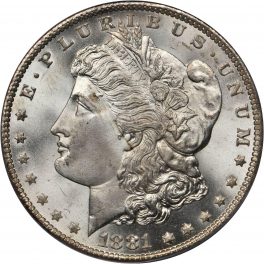 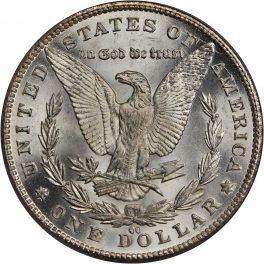 Coinage at the Carson City Mint was suspended from April 1 to October 1, 1881. Accordingly, only 296,000 1881-CC Morgan silver dollars were struck this year, the second lowest mintage of the early 1878-1885 series. As such, the 1881-CC should be a rarity today, but it is not. Large quantities of the 1881-CC were stored by the Treasury to be released 80 years later. Today, this variety is easy to find in Mint State, often with deep luster and good strike. The low mintage numbers and the Carson City mintmark make this a very popular issue. Worn grades of the 1880-CC are rarities! (No proofs were issued.)
Circulated 1881-CC Coins Are Rare, But Still Less Desired: This date is actually highly elusive in circulated grades; seemingly the lower on the grading scale you go the tougher it is to find an example_ask anyone putting together a high-grade circulated set of Morgans.
Thousands of MS Coins Are In The Marketplace: At one point the General Services Administration held nearly 50% of the total mintage of the date; these were sold in the early 1970s. All grades are represented in the marketplace today right up to and through the MS-65 rating.

The obverse text on the Morgan Dollar reads “Liberty; E Pluribus Unum; 1881.” The reverse text on the Liberty dollar reads “United States of America; In God We Trust; One Dollar; CC.” The obverse of the silver one dollar coin has a bust of a female facing the left wearing a cap and small crown, with flowers tucked in her hair and stars surrounding the border. The reverse of the Morgan Dollar has an eagle in the center with its wings spread and a wreath surrounding.