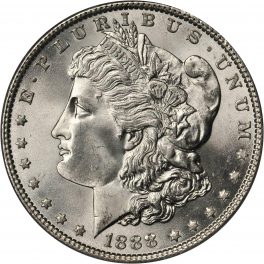 The year 1888 Morgan Silver Dollar saw the continuing mintage of vast quantities of silver dollars under the provisions of the 1878 Bland-Allison Act. Most production was accomplished at Philadelphia and New Orleans, with a lesser amount at San Francisco. Apparently, quantities were released into circulation at or near the time of mintage. After that, many were stored while others were melted under the 1918 Pittman Act. In the mid-1950s, 1888 dollars were released in quantity-probably by the millions. Both circulated and Mint State grades are plentiful. While abundant, the quality of specimens varies dramatically. Circulation strike varies from poor to decent, with sharp pieces in the minority. Luster ranges from grainy to good. This is the era when the Philadelphia Mint was careless with its production of Proof Morgan dollars. A nicely struck Proof of the date with any degree of cameo contrast is a prize, but you’ll have to search for an example with these qualities.
Easy to Find Coin Because of Amount Produced: Almost always available in EF and AU at any numismatic venue.
Look for Higher Grades if You Desire Rarity: This plentiful $1 silver coin is found today in just about any Uncirculated grade a collector could desire including at the ultra-gem level. Looking for a frosty MS-65 with a crisp strike would be worth the time for the patient collector.

The obverse text on the Morgan Dollar reads “Liberty; E Pluribus Unum; 1888.” The reverse text on the Liberty dollar reads “United States of America; In God We Trust; One Dollar.” The obverse of the silver one dollar coin has a bust of a female facing the left wearing a cap and small crown, with flowers tucked in her hair and stars surrounding the border. The reverse of the Morgan Dollar has an eagle in the center with its wings spread and a wreath surrounding.