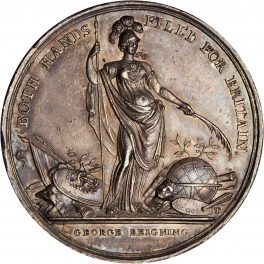 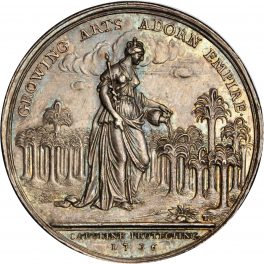 The Cistern Medal or the Carolina Medal, as it is commonly known, has an erroneous history due to the inaccurate cataloguing of Mr. W. H. Strobridge, who believed the medal was created to commemorate the division between North and South Carolina. In actuality, 30,000 medals were created as a lottery ticket of sorts for the ownership of an excellent wine cistern, created by London goldsmith Henry Jernegan. Obverse depicts Britannia with a spear and palm branch, standing on war trophies. Around the image states, “Both hands fill’d for Britain” and exergue, “George reigning”. Reverse depicts the Queen watering young palmetto trees, while holding a scepter. The Queen’s protection over the artist is indicated by her consent to be featured on the medal.

1733 Company of the Indies Medal