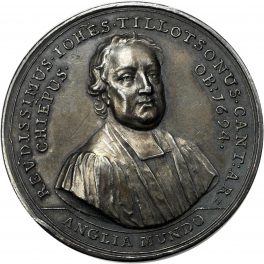 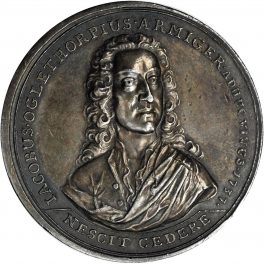 James Oglethorpe established the colony of Georgia in 1732 and allowed settlers of all religions, opposed slavery, and maintained ties with nearby Indian settlements, thereby setting his colony apart from any other New World colony. Known most notably for his prison reform, Oglethorpe was active in government and also acted bravely in the military after the Spanish attempted to invade Georgia. Among the common people, Oglethorpe was revered as a great philanthropist. This medal was intended to be the prize for the best poem entitled, “The Christian Hero.” Obverse of this medal depicts the Archbishop of Canterbury, facing three-quarters to the right. Around the image translates, “The Most Reverend John Tillotson, Archbishop of Canterbury, died 1694.” Reverse image is of Oglethorpe, the text around his image translating, “James Oglethorpe, Esp., still living, 1737. Knows not how to yield.”