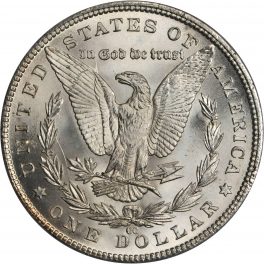 The 1884-CC Morgan Silver Dollar was considered to be a prime rarity until the 1930s. Nearly 85% of the original mintage of 1,136,000 coins-or 962,638 remained in the hands of the Treasury Department in 1964. Today, worn 1884 Carson City $1 coins are rare, and Mint State coins are plentiful and available at prices within reach of the average collector. Strike is usually average to above average. Luster varies from frosty and attractive to indifferent. Prooflike examples are typically worth more, but do not confuse these examples with proofs. Proofs are not produced in branch mints.
This 1884-CC Morgan Can Be Found In Higher Grades Rather Than Lower: Worn 1884-CC Morgan dollars are not often seen in the numismatic marketplace, but EF and AU coins are sometimes available.
Look for UNCs with Nice Strikes As They Were Made Widely Available From GSA: This date is available in all Mint State grades from MS-60 right up to ultra-gem specimens. A nicely struck and boldly lustrous MS-65 makes a great addition to a Mint State Morgan dollar set. The date was heavily represented in the GSA sales of the early 1970s.

The obverse text on the Morgan Dollar reads “Liberty; E Pluribus Unum; 1884.” The reverse text on the Liberty dollar reads “United States of America; In God We Trust; One Dollar; CC.” The obverse of the silver one dollar coin has a bust of a female facing the left wearing a cap and small crown, with flowers tucked in her hair and stars surrounding the border. The reverse of the Morgan Dollar has an eagle in the center with its wings spread and a wreath surrounding.