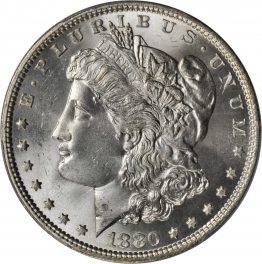 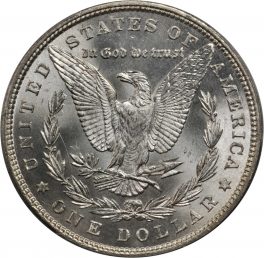 The Philadelphia Mint struck many millions of 1880 Morgan silver dollars, and from many different dies. The series year contains more than two dozen overdate varieties from all four mints: Philadelphia, Carson City, New Orleans, and San Francisco. Apparently, the Philadelphia Mint chose to re-use surplus dies from 1879, and rather than waste them, the dies were overdated with “1880.” As a result, while quantities are plentiful the quality varies from sharply struck to weak, and appearance varies from gorgeous to unattractive. The overdated varieties require significant magnification to discern. These overdates have attracted attention among specialist collectors, though not so much from investors.
If Circulated, 1880 Morgans Are Basically Worth Silver: Always available from VF to AU though the availability of Mint State pieces makes the pursuit of circulated examples almost nonexistent. Many such pieces find their way into melting pots whenever silver prices go up.
Bag Hoards Have Supplied High Grade Coins: Always available in any and all grades up to and including MS-65 and often finer. Bag quantities of the date were paid out from storage in Philadelphia many times over the ensuing decades since striking. Bank vaults were also a source for bags of this date in the 1950s. Indeed, by the time of the Treasury releases of the early 1960s, few bags of this readily available date remained.
Proofs Are Widely Available: Hundreds of Proof 1880 Morgan dollars are available to today’s collecting community. Many of the survivors exhibit lively cameo contrast. However, many of the existing Proofs show traces of cleaning or mishandling and cherrypicking for quality is advised.
A Note About 1880 with 80 over 79: These, made in several die combinations for circulation, represent the use in 1880 of 1879-dated dies that were on hand in the die department of the Philadelphia Mint.

The obverse text on the Morgan Dollar reads “Liberty; E Pluribus Unum; 1880.” The reverse text on the Liberty dollar reads “United States of America; In God We Trust; One Dollar.” The obverse of the silver one dollar coin has a bust of a female facing the left wearing a cap and small crown, with flowers tucked in her hair and stars surrounding the border. The reverse of the Morgan Dollar has an eagle in the center with its wings spread and a wreath surrounding.