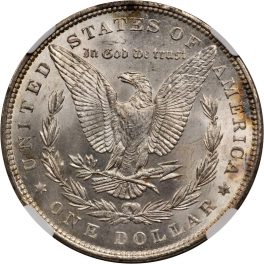 In the early 20th century stored 1898 Morgan Silver Dollars released in large quantities by the Treasury Department through the Federal Reserve System (established in 1913), so that by the mid-1950s Mint State coins were very common in eastern banks. Prior to that release period, Uncirculated coins were scarce if not rare. Today, the 1898 Morgan Silver Dollar is plentiful in all grades, from worn-usually in VF or EF-to gem Mint State. Most are well struck with attractive luster. Because they are plentiful in all grades, the lower graded coins tend to only be worth the silver that they are made from. Continuing the tradition of 1896 and 1897, Proofs of this date can be found with bold cameo contrast and exceptional eye appeal. Hold out for one of these great Philadelphia Mint Coins.
An Easy $1 Coin to Add to a Collection: Always easily found in EF and AU by those working on circulated Morgan dollar sets.
Like the Circulated Coins, UNC Are Available and Cheap: Readily available from MS-60 right on through the gem category, thanks, no doubt, to the seemingly ever-present bag quantities released in the 1950s for this and many other dates. A sharp MS-65 with exceptional eye appeal should not prove difficult to obtain.

The obverse text on the Morgan Dollar reads “Liberty; E Pluribus Unum; 1898.” The reverse text on the Liberty dollar reads “United States of America; In God We Trust; One Dollar.” The obverse of the silver one dollar coin has a bust of a female facing the left wearing a cap and small crown, with flowers tucked in her hair and stars surrounding the border. The reverse of the Morgan Dollar has an eagle in the center with its wings spread and a wreath surrounding.