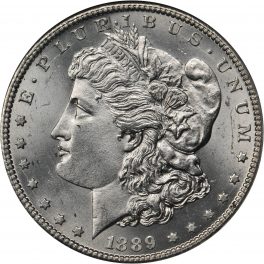 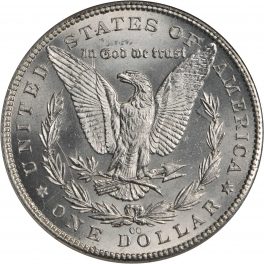 The 1889-CC Morgan Silver Dollar in Mint State is the most elusive Carson City Morgan silver dollar and far surpasses its closest rivals, the 1879-CC $1 and 1893-CC $1 coin, in rarity. Offerings of higher grade coins are apt to be one at a time instead of by the roll or bag. Relatively few coins were released for circulation in the year of mintage. The 1889-CC Morgan silver dollar is very rare in worn grades. In 1992, the coin in worn grades was the second most valuable, after the 1893-S among circulation strike Morgan dollars. Mint State 1889-CC pieces are few and far between and can be worth a hefty paycheck. Coins usually show an average strike at best. The luster varies from shallow to satiny to frosty. No proofs were produced at this Carson City branch mint.
May Be Hard to Find But it is a Must Have for Any Collection: This rare date can be found in circulated grades on occasion, running the gamut from well-worn Good to AU with many of the survivors in the EF-AU range. More collections have circulated examples than have Uncirculated coins.
A Rare Coin Indeed so Buy One if You Find It: A rare prize in Mint State, this date is often found prooflike. MS-60 to 62 are the grades typically encountered, and anything above that level is a remarkable coin indeed. Gems exist but are priced well into the stratosphere and out of the reach of most collectors. If a Mint State-63 coin can be found with not too many bagmarks and solid design details, by all means snap it up!

The obverse text on the Morgan Dollar reads “Liberty; E Pluribus Unum; 1889.” The reverse text on the Liberty dollar reads “United States of America; In God We Trust; One Dollar; CC.” The obverse of the silver one dollar coin has a bust of a female facing the left wearing a cap and small crown, with flowers tucked in her hair and stars surrounding the border. The reverse of the Morgan Dollar has an eagle in the center with its wings spread and a wreath surrounding.