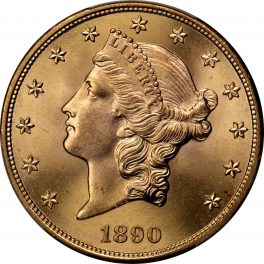 The typical 1890-S double eagle is overall sharply struck, although many examples display less than full definition to the obverse stars. Luster quality is also very good, the typical Mint State survivor displaying a vibrant satin or frosty finish. The surfaces are almost always abraded to some extent, although the 1890-S is a bit easier to locate with a relatively smooth appearance than most San Francisco Mint double eagles from the 1880s. Both circulated and lower end Mint State examples are obtainable with ease, although the 1890-S is more elusive in all grades than other San Francisco Mint double eagles from the 1890s. In Choice Uncirculated the 1890-S is legitimately scarce with most such pieces grading MS-63; near-Gems in MS-64 are far rarer. While a few Gem Mint State coins are known, the 1890-S is clearly a major condition rarity at that grade level. This is one issue that benefited greatly from the 2013 discovery of the Saddle Ridge Hoard, which contained nearly 100 1890-S double eagles, including the coin that now ranks as the finest certified at PCGS MS-66+.