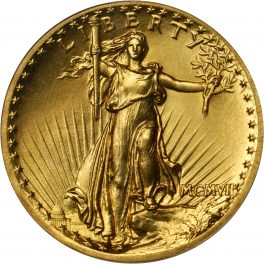 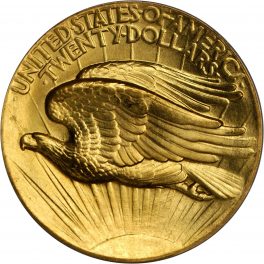 Most examples of the 1907 No Motto St. Gaudens are well struck, although minor softness of detail is typically seen in the center of Libertys portrait on the obverse as well as over the eagles leg feathers on the reverse. This is largely due to unsatisfactory die preparation as opposed to inadequate striking pressure. Luster is strong on the 1907 Arabic Numerals double eagles, and it is typically either satiny or softly frosted. The typical Mint State survivor is apt to display at least a few significant abrasions, and locating an overall smooth coin can be a challenge.
Thanks to the repatriation of a large number of coins from overseas hoards during the late 20th century, this issue is plentiful in grades through MS-64. The 1907 Arabic Numerals is scarce in MS-65 compared to the truly common issues such as the 1908 No Motto and 1928, although enough exist that the buyer should have little difficulty locating one. At the MS-66 level, examples are scarce yet obtainable with relative ease. In higher grades this issue is rare, the finest certified a pair of coins graded MS-67+ at PCGS. A small number of exceptionally well produced circulation strikes were sandblasted in the Mint; these are exceedingly rare with fewer than five known.