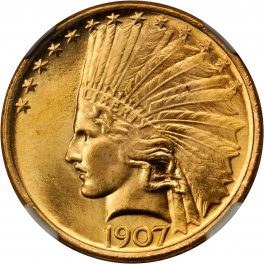 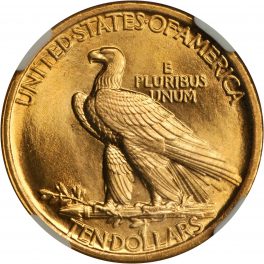 History, Information, and Value of 1907 No Periods Indian Gold Eagle

Most 1907 No Periods Indian Gold Eagles are softly defined in the center of Liberty’s portrait on the obverse as well as over the high points of the reverse eagle. Luster is very good to excellent for typical Mint State coins with the finish usually soft and satiny. Most examples are moderately to heavily abraded, as there is a sizeable population through Gem Mint State, overall smooth-looking eagles of this issue can be located with relative ease.
The 1907 No Periods Philadelphia Mint coin is one of the more common Indian eagles. As this was the first issue of the type to reach general circulation, many examples were saved by contemporary collectors and others for their novelty. Circulated coins are plentiful, as are Mint State pieces in the MS-60 to MS-64 grade range. Gems in MS-65 and MS-66 are scarce in an absolute sense, yet also common within the context of the Indian eagle series. Few examples have been certified in MS-67 and it is nearly unobtainable any finer, although PCGS and NGC have certified a few outstanding survivors in MS-67+ and MS-68. One of the PCGS MS-68s appeared in the Stack’s Bowers Galleries Chicago ANA Auction of August 2013. Although the Mint did not produce a regular issue Proof of the 1907 No Periods, two Sandblast Proofs are known, one of which is likely the Gaston DiBello specimen auctioned by Stack’s in May 1970.