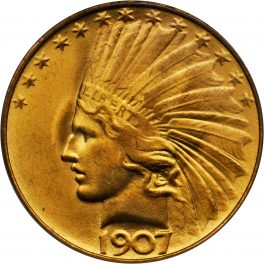 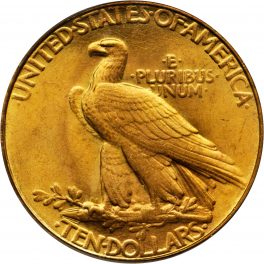 The strike of the 1907 Periods, Rounded Rim Indian Gold Eagle is universally soft for this issue, with the detail to the hair strands at Liberty’s ear on the obverse and the eagle’s wing, trailing leg and left talon on the reverse usually incomplete. On the other hand, luster quality for this issue is excellent with most examples displaying a vibrant satin texture. Significant abrasions are seldom a problem as a result of the manner in which they were originally distributed. The fields always display numerous random die polish lines, as produced.
While it was beautiful and faithful to Saint-Gaudens’ original design, the 1907 Periods, Wire Rim eagle was deemed impractical for regular issue production. The Rounded Rim counterpart represented the Mint’s attempt to improve the design by adding a border, ostensibly to better protect the finished coins during commercial use. The Philadelphia Mint struck 31,500 examples with the intention of placing most of the coins into circulation. In the end, however, this modified design was also found wanting and 31,450 pieces were destroyed before leaving the Mint. The 50 that were not destroyed represent examples distributed to Mint officials or obtained by private citizens and museums directly from the Mint. Almost all of these have survived, and most have been carefully preserved over the years, with many in the MS-64 to MS-66 grade range. Superb Gems are rare with the finest certified a single MS-67+ graded by PCGS. A single Satin Proof of this issue is known, and it is likely the specimen from the Captain Andrew North cased set of 1907 and 1908 gold coinage offered by Stack’s during the 1970s. This is clearly a specially produced coin that is not a regular Mint issue; its existence was almost certainly unknown to all but a few insiders at the time of striking.