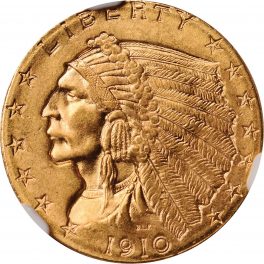 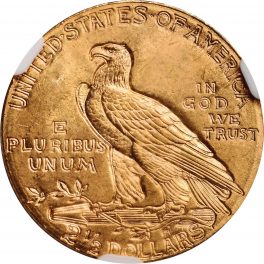 The 1910 quarter eagle is generally well struck, though traces of weakness may be visible at the central obverse on some examples. Die fatigue in the form of swelling may also be present at the perimeter. The luster is typically handsome and overall frosty, with areas of satiny texture usually on the reverse. This issue most often displays medium to deep yellow-gold hues, with richer amber less common. While many pieces exist with bag marks and surface blemishes, the general eye appeal seen for the year is good. Collectors should be patient and search for choice and attractive coins at a given grade level or price point.

Examples of this issue can be easily located in all grades up through MS-63, with MS-64 coins remaining only slightly scarcer. Populations quickly dwindle above that point, as coins grading MS-65 are very scarce and anything finer is extremely rare. Coins grading MS-66 quality for the condition census, and pieces above MS-66+ are virtually nonexistent.

Proofs: Despite its unpopularity with contemporary collectors, the Philadelphia Mint persisted with the Satin Finish introduced the previous year in production of the Proof 1910 quarter eagle. Official records indicate a mintage of 682 pieces, far and away the highest in the entire 20th century Proof gold series. This mintage figure conceals the rarity of the Proof 1910 in today’s market, so much so that some numismatic scholars question its validity and suspect that it may be a simple bookkeeping error. Alternatively, the Mint could have struck 682 Proof quarter eagles in 1910, only to melt the vast majority as unsold at year’s end. In either case, based on the number of coins extant, we believe that no more than 200 examples of this date were actually distributed to contemporary collectors. With fewer than 125 examples accounted for in numismatic circles, the 1910 is rarer than both the first year 1908 and the 1911 Proof Indian Head quarter eagles.