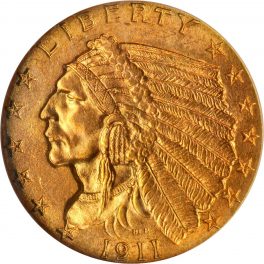 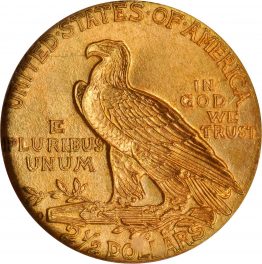 The 1911-D quarter eagle is the key Indian Head quarter eagle, with a mintage that is less than one quarter of the second lowest mintage issue, the 1914. Examples are generally well struck, exhibiting a wire rim at the right obverse that can be considered somewhat diagnostic to the issue. The color is generally orange-gold with greenish hues, accompanying subdued luster that is _a combination of granular and frosty, according to series specialist Mike Fuljenz.

The 1911 Denver Mint coin tends to be attractive, though many examples have seen some form of conservation, placing a premium on originality in the marketplace. Two varieties of mintmark are found for this year, including a Strong D and a Weak D. The Weak D is sometimes so weakly impressed that it is barely visible, leading many pieces to be mistaken for Philadelphia examples at first glance. Collectors are advised to avoid Weak D examples, as Strong D coins will always command a considerable premium.

Because of the popularity of the issue, worn examples have been spared from melting and pieces are readily available in essentially all circulated grades. However, many pieces have been mishandled in the form of cleaning or mounting as jewelry. These should be avoided. While populations dwindle considerably in Uncirculated grades, coins grading MS-63 can be acquired with little searching and MS-64 examples usually make an appearance at bigger shows and auctions. Even so, Gem examples remain rare, usually only coming to public auction two to four times per year. A single MS-66+ is thought to be the finest known of the mintage.