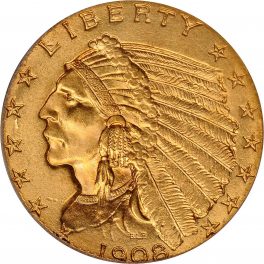 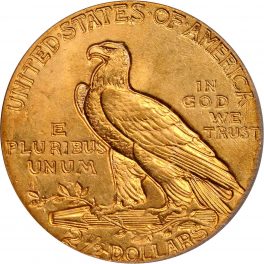 As the first year of issue, the 1908 quarter eagle was saved as a novelty and remains popular among collectors today. The obverse is typically well struck, but the reverse often displays weakness across the eagle’s right facing wing due to a lack of detail in the die that was corrected in subsequent issues. The overall eye appeal tends to be strong, with decent, satiny luster and well preserved surfaces.

Because examples of this issue were saved in quantity at the time of release, Choice Mint State coins are readily available today and Gem pieces can be acquired with minimal effort. An example must grade a minimum of MS-66+ before being considered for the Condition Census.

Proofs: The Proof 1908 Indian Head quarter eagle was prepared by sand blasting the surfaces after striking to provide a heavy, coarse-grain texture to the finish. Most examples of this year display a deep olive-gold complexion. In anticipation of strong sales linked to the debut of the new design type, the Philadelphia Mint struck 236 Sand Blast Proof 1908 quarter eagles. While enough specimens were indeed ordered and preserved by the contemporary public to make the 1908 the most plentiful Proof Indian $2.50, the sand blast finish came as a shock to many and overall sales were disappointing. Probably at least one third of the original mintage was eventually melted as unsold.