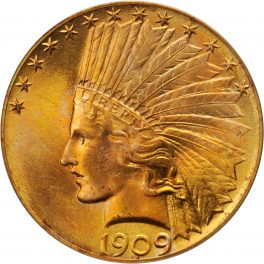 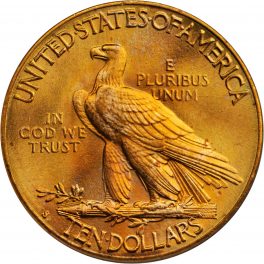 Most 1909-S Motto Indian Gold Eagles are sharply struck; the few exceptions reveal only minor lack of detail to isolated high points. Luster is generally adequate, if seldom outstanding, with the typical Mint State survivor displaying either a satin or softly frosted texture. Abrasions are prevalent and it will take some persistence to locate an overall smooth-looking coin.
Although relatively obtainable in circulated grades, the 1909 San Francisco Mint coin is very scarce even at lower Mint State levels through MS-62. It would be rare in those grades were it not for the discovery of a sizeable hoard during the late 1970s, which yielded most of the Uncirculated examples known today. Since most of the hoard coins are liberally abraded, the 1909-S remains elusive in Choice Mint State and rare any finer. A couple of virtually pristine examples are known, however, including an NGC MS-68 and PCGS MS-67+. The latter piece appeared in the Stack’s Bowers Galleries August 2013 sale of the Bentley Shores Collection.