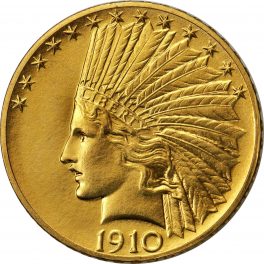 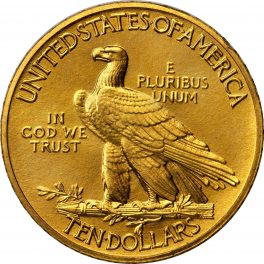 The typical 1910 Indian Gold Eagle is sharply struck with above average luster that is frosty and finely granular. Even more lustrous are the relatively few satiny pieces known. Surface preservation ranges from heavily abraded to virtually pristine, with most examples displaying at least a few significant marks.
One of the more common Indian eagles, the 1910 is obtainable with ease in grades up to and including MS-64. Gems in MS-65 are scarce in an absolute sense, but even at that level this is one of the more frequently encountered of its type. This Phiadelphia Mint coin is rare in MS-66 and very rare as a Superb Gem. There is a small concentration of grading events in NGC MS-68 that comprise the finest seen by major third-party certification services. The 1910 has the highest mintage among Proof Indian eagles, but the reported mintage of 204 specimens conceals its rarity. With only 50 to 75 coins extant, in fact, either most examples of this issue were destroyed in the Mint when they failed to sell or the reported mintage is inaccurate. In any event, the Proof 1910 is a rare issue that is the province of advanced collectors. Although the Proof 1910 was officially produced with a Satin Finish, a single Sand Blast Proof is known to exist. That coin surfaced at a numismatic convention in North Carolina during the early years of the 21st century as part of a four-piece set of Sand Blast Proof 1910 gold coinage and, of this writing, remains unique.