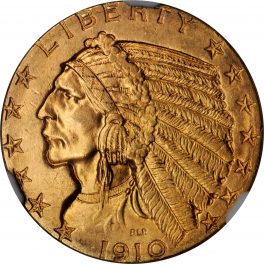 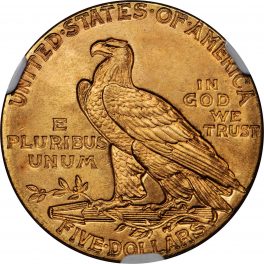 History, Information, and Value of 1910 Indian Gold Half Eagle

This is a well-produced half eagle that, in Mint State, is usually characterized by sharp striking detail and pleasing luster. Most examples range from lightly to heavily abraded. The 1910 Indian Half Cent is challenging to locate with overall smooth-looking surfaces.

One of the more available Indian half eagles in an absolute sense, the 1910 Philadelphia Mint coin is readily obtainable in worn condition as well as in Mint State grades through MS-63. Near-Gems in MS-64 are scarce, yet obtainable with patience. This issue is rare as a Gem with some of the finest known survivors certified MS-66 by NGC. The reported mintage of 250 pieces for the Proof 1910 belies its rarity since, with fewer than 75 specimens believed extant, the vast majority of examples were almost certainly destroyed in the Mint when they failed to sell to contemporary collectors. This issue was officially produced with a Satin Finish, but a single Sand Blast Proof is known. That unique specimen was part of a four-piece set of Sand Blast Proof gold coins that surfaced at a North Carolina numismatic convention around the turn of the 21st century.