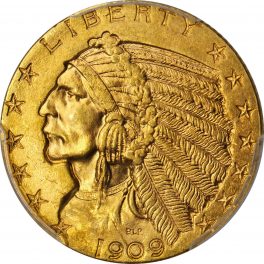 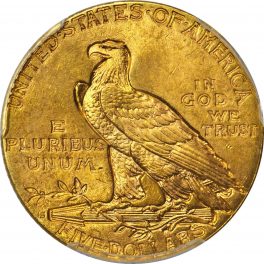 History, Information, and Value of 1909-S Indian Gold Half Eagle

When encountered in Mint State the 1909 San Francisco Mint Indian Half Eagle is sharply struck with highly lustrous surfaces. Softly frosted coins are prevalent, but a few satiny pieces are known. The typical survivor is liberally abraded.

Relatively scarce in circulated grades, the 1909-S is one of the rarest Indian half eagles in Mint State. Most Uncirculated survivors are in the MS-60 to MS-62 range, and even in such grades they are elusive. Choice examples in MS-63 and MS-64 are rare, while Gems are nearly unobtainable. One of the finest known 1909-S half eagles is the Virgil Brand specimen in PCGS MS-67, believed to have been obtained directly from the San Francisco Mint in the year of issue.